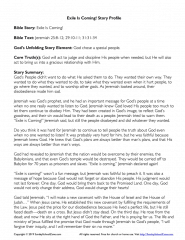 This Exile Is Coming! Story Profile provides a simple overview of the story (for kids) along with commentary (for parents and leaders), points of interest, and an approximate date for the story. A printable PDF for this profile is available here and all related activities are listed here.

Core Truth(s): God will act to judge and discipline His people when needed, but He will also act to bring us into a gracious relationship with Him.

Jeremiah was God’s prophet, and he had an important message for God’s people at a time when no one really wanted to listen to God. Jeremiah knew God loved His people too much to let them continue to disobey Him. They had been created in God’s image, to reflect God’s goodness, and their sin would lead to their death as a people. Jeremiah tried to warn them. “Exile is Coming!” Jeremiah said, but still the people disobeyed and did whatever they wanted.

God had revealed to Jeremiah that the nation would be overcome by their enemies, the Babylonians, and that even God’s temple would be destroyed. They would be carried off to Babylon for 70 years as prisoners and slaves. “Exile is coming,” Jeremiah declared again!

God told Jeremiah, “I will make a new covenant with the House of Israel and the House of Judah…” When Jesus came, He established this new covenant by fulfilling the requirements of the Law. Jesus paid the price for our disobedience because He lived a perfect life, but He still faced death—death on a cross. But Jesus didn’t stay dead. On the third day, He rose from the dead; and now He sits at the right hand of God the Father, and He is praying for us. The life and ministry of Jesus fulfilled the promise that God made through Jeremiah to God’s people, “I will forgive their iniquity, and I will remember their sin no more.”

Jeremiah’s message that exile is coming teaches us that God will act to judge and discipline His people when needed, but He will also act to bring us into a gracious relationship with Him. We were all born wanting our own way. It’s easy to sin, but God loves us too much to leave us in our sin. He sends the Holy Spirit to show us our sin, just like He sent Jeremiah to His people many years ago. Obeying is still hard, but now we are not alone. God sends His Holy Spirit and His Word to help us obey. Now, we can show God how much we love Him and thank Him for Jesus by obeying His Word.

Commentary:
After King David and his Son, Solomon, ruled over a united Israel, there was a civil war that split the nation in two. Most of the 12 tribes formed the northern kingdom that kept the name “Israel.” The tribe of Judah and many from the priestly tribe of Levi remained in the south and continued as the nation of Judah. Israel, the northern kingdom, finally fell to Assyria in 722 BC and the people of the northern kingdom were dispersed. The southern kingdom of Judah continued for more than a hundred years until it fell to the Babylonians under Nebuchadnezzar. The people of Judah were exiled to Babylon in more than one deportation until the City of Jerusalem and Solomon’s great temple were finally destroyed in approximately 587 BC. The people of God were now in what is called “The Babylonian Exile.” Things would never be the same for the Hebrew people.

Jeremiah was a prophet to the southern kingdom of Judah. He lived during the tumultuous time leading up to and following the destruction of Jerusalem and the temple. Jeremiah was called on by God to deliver a very unpopular message. “Destruction is coming! Exile is coming!” The final destruction inevitably did come when Jerusalem and the temple were destroyed and only a few people escaped deportation to Babylon. Jeremiah saw it all, and while he escaped deportation, he was finally carried to Egypt (against his will) by other surviving Jews where he continued his unhappy ministry of prophecy against God’s sinful people and its leaders as well as Egypt itself.

Jeremiah lived at a very sad time for God’s people. He saw their sin and their rejection of God’s will for them. He saw God use a terrible enemy to bring judgment on them and he watched as his beloved city and Solomon’s Temple, the great house of God, literally fell under the devastating judgment of God. It’s no wonder that Jeremiah is sometimes called “The Weeping Prophet.” In addition to the Book of Jeremiah, that tells us so much about this great prophet, he is also considered to be responsible for the Book of Lamentations, a collection of grieving poems over the destruction of Jerusalem. Jeremiah had much to grieve about.

Nonetheless, Jeremiah is also a book of hope. He consistently declared that exile is coming. But he also assured the people that exile wouldn’t last forever. After 70 years (Jer. 29:10), the people would be able to return and resettle the land. This was a hope that the people would cling to during the Babylonian Exile.

It would be a new generation that would return to the land, however. Much like the sinful Hebrews who died in the Wilderness Wandering, so the sinful people of Judah were taken to a place of sorrow and would die there. Jeremiah could look forward (prophetically) and see an end to the exile, but he also saw that God would, eventually, begin to do something different with His people.

God had established the Mosaic Covenant at Sinai centuries before. Jeremiah could foresee a time when God would establish a “new covenant” with His people (Jer. 31:31-33). This new covenant of the future would be a covenant of the heart where God would write His laws on peoples’ hearts and enable them by His own presence to be His people. The future of God’s Kingdom would be very different than what the people had experienced in the past.

From a New Testament perspective, we know that this “new covenant” ultimately was established by the work of Jesus, the Messiah. Jesus announced the true end of the exile, forgiveness, and the final arrival of God’s great Kingdom.

This story, however, is about Jeremiah’s prophetic ministry to the people of Judah in the years just before the nation fell to the Babylonians. It will focus on Jeremiah’s message about the certainty of the coming judgment, the inevitable exile to Babylon, and the temporary (70 year) duration of that exile. It was a message of both destruction and hope. Exile is coming, but it won’t last forever! God will act to judge His people, but He will also act to bring them home, end the exile, and begin to do a new work in their midst.

This truth remains today… God will act to judge and discipline His people when needed, but He will also act to bring us into a gracious relationship with Him.

Approximate Date:
The deportations of people from Judah to Babylon began in approximately 597 B.C. Jeremiah’s ministry began probably around two decades earlier. This particular story could be dated at approximately 600 B.C. 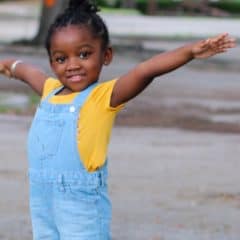 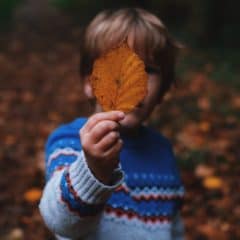 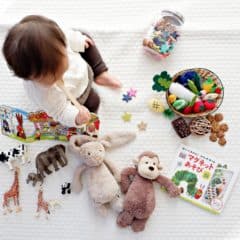