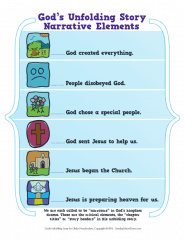 The God’s Unfolding Story Narrative Elements can be used to teach any age group the biblical story. They are designed to summarize the entire biblical story using the six simple elements below. Each story element has a corresponding visual icon to help kids learn the story quickly and easily. The God’s Unfolding Story Cube can be used to review the elements on a regular basis. Collectively, the six story (narrative) elements provide a framework for the grand, sweeping biblical story, so it also helps kids learn where each of the individual stories falls within Bible history. Sunday School Zone has also created a free, printable Bible Timeline that can be assembled and used in any Bible teaching setting.

This part of the story includes the creation events found in Genesis 1 and 2. God is the Creator of all things and is, therefore, the sovereign Lord of the universe. This is the Kingdom of God revealed, with humanity serving as God’s representatives, bearing His image as they accomplish His purposes.

This is a small portion of the biblical record (Gen. 3-11), but it is important because it explains why things in the world are not as God designed. Adam and Eve sinned and brought death into God’s good creation. Evil is now growing and having a devastating impact. This is God’s Kingdom rejected.

The remainder of the Old Testament story is included in this segment. These are the people God chose to be a blessing to “all the peoples on earth” (Gen. 11:3). Throughout their difficult history, the Hebrew people anticipated God’s promised Messiah. This is the Kingdom anticipated.

God sent Jesus to help us.

Jesus is the central figure of God’s Unfolding Story. He is the promised Messiah of the Old Testament and the person through Whom God entered into this world to set things right. In His ministry, sacrificial death, and resurrection, Jesus announced and inaugurated God’s great Kingdom.

The Church has now become the transformed people of God. They are the people of God’s New Covenant (Jer. 31:31-33) and the expression of God’s Kingdom in the world. The Church is the “Body of Christ” (1 Cor. 12:27). This is the Kingdom represented in God’s people.

Jesus is preparing heaven for us.

Jesus has promised He is preparing a place for us (John 14:2). This “place” will be the restoration of God’s Kingdom as we saw it in Genesis 1 and 2. It will be heaven on earth as God destroys evil and reestablishes a world where people function as He intended. This is the Kingdom restored.
.

Other free activities that teach the God’s Unfolding Story Narrative Elements are also on the site including coloring pages.

Click on the Get Activity button below to see and download a PDF of the God’s Unfolding Story Narrative Elements. 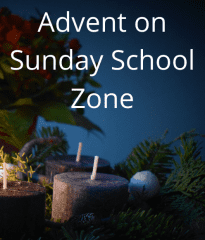 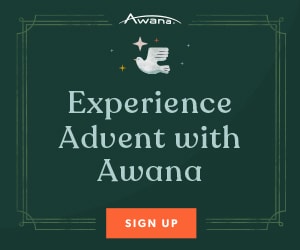