Naaman Was Healed Spot the Differences 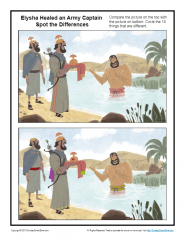 Bible Lesson: A foreign army captain named Naaman came to the prophet Elisha to be healed of leprosy. Elisha told him he must wash in the Jordan River, but Naaman was proud and didn’t want to do this. Finally, he humbled himself and did as Elisha had instructed. When he did, he was healed! This spot the differences activity shows Naaman being healed in the river and will help kids learn the value of trusting and obeying the Lord.