Woman at the Well Story Profile 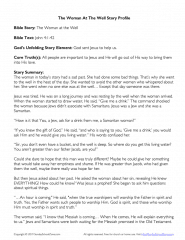 This Woman at the Well Story Profile provides a simple summary of the story (for kids) along with commentary, points of interest, and an approximate date for this familiar story. A printable PDF for this profile is available here and all related activities are listed here.

Bible Story: The Woman at the Well

Core Truth(s): All people are important to Jesus and He will go out of His way to bring them into His love.

The woman in today’s story had a sad past. She had done some bad things. That’s why she went to the well in the heat of the day. She wanted to avoid the other women who whispered about her. She went when no one else was at the well… Except that day someone was there.

Jesus was tired. He was on a long journey and was resting by the well when the woman arrived. When the woman started to draw water, He said, “Give me a drink.” The command shocked the woman because Jews didn’t associate with Samaritans. Jesus was a Jew and she was a Samaritan.

“How is it that You, a Jew, ask for a drink from me, a Samaritan woman?”

“If you knew the gift of God,” He said, “and who is saying to you, ‘Give me a drink,’ you would ask Him and he would give you living water.” His words confused her.

“Sir, you don’t even have a bucket, and the well is deep. So where do you get this living water? You aren’t greater than our father Jacob, are you?”

Could she dare to hope that this man was truly different? Maybe he could give her something that would take away her emptiness and shame. If He was greater than Jacob, who had given them the well, maybe there really was hope for her.

But then Jesus asked about her past. He asked the woman about her sin, revealing He knew EVERYTHING! How could he know? Was Jesus a prophet? She began to ask him questions about spiritual things.

The woman said, “I know that Messiah is coming… When He comes, He will explain everything to us.” Jews and Samaritans were both waiting for the Messiah promised in the Old Testament.

To the woman’s great surprise, Jesus replied, “I am He, the One speaking to you.”

His words hung in the air, and the woman could feel her heart rise up. Her thoughts swirled! Was she really speaking to the Messiah? Is that how He knew everything about her? She had to go and get others!

The woman went into the town and brought those she had avoided before to hear Jesus. Soon they, too, believed Jesus was the Messiah they had been waiting for!

That day, salvation came to those who believed and the Samaritan woman’s past was forgiven. Jesus knew her, even before she spoke a word, and Jesus knows you, too. He knows everything you have ever done… the good and the bad, and He loves you anyway. You can also know God and worship Him with your whole heart just like the woman at the well!

The story of the Samaritan woman at the well is both lengthy and rich, containing many truths that were important to John’s overall purpose of the Gospel. In addition, the complete text, John 4:1-42, contains multiple facets that can easily distract us if we’re not careful. Due to the length of the text and its multiple facets, our story and activities will focus primarily on Jesus’ conversation with the woman and give limited attention to the role of the disciples and the other Samaritan villagers in the story. Though that is not to suggest that they are unimportant. They do, in fact, support the overall purpose of the story.

This important story underscores the global scope of Jesus’ mission of restoration and salvation. By pointing to the Pharisees (4:1-3) as Jesus’ reason for leaving Judea and journeying to Galilee, John places the entire story in the context of Jewish expectations and, eventually, Jewish opposition to Jesus and His ministry. For the typical Second Temple Jew, the anticipated Kingdom of God was essentially a return to the days of King David and his son, King Solomon. And while the Old Testament certainly envisioned a day when other nations would come into the domain of God’s Kingdom, those nations were not generally expected to become equal “citizens” in that Kingdom. Jesus regularly challenged this expectation as did the early church leaders in The Book of Acts. In fact, Jesus’ final words as recorded by Luke in Acts 1:8 point forward to the expanding nature of the Kingdom, and specifically include the Samaritans…

But you will receive power when the Holy Spirit has come on you, and you will be My witnesses in Jerusalem, in all Judea and Samaria, and to the ends of the earth (Acts 1:8 emphasis added).

Both this story of the woman at the well and Acts 1:8 make the point that the character of God’s Kingdom is spiritual in nature rather than racial, gender-based, or geographical.

To say the Samaritans were not friends to the Jews would be to put it mildly. There was violent conflict between the two groups on more than one occasion and each developed competing claims to God’s Revelation and His desired place of worship. The Jews considered the Samaritans half-breed, unwelcome inhabitants to the land that had previously belonged to Israel. Many Jews would have considered the Samaritans worse than Gentiles. It would not have been uncommon, therefore, for some Jews to travel essentially around the core of Samaritan land in order to minimize contact with them.

John’s telling of the story reveals that Jesus is acting to challenge and overturn several of the normal cultural conventions of that day. First, Jesus makes it a point to go THROUGH Samaria as though He is on a divine appointment. Such a notion would have been unthinkable to the typical Second Temple Jew. Then, Jesus initiates a conversation with a Samaritan. This, too, was something “good” Jews simply wouldn’t do. To make matters worse, His conversation is with a woman. AND, she is a woman of less-than-stellar lifestyle. For the Samaritan villagers to then “believe” and confess that Jesus is the Messiah would suggest that they recognized God’s Messiah before His own chosen people.

The conversation between Jesus and the woman (4:4-26) holds many insights regarding personal evangelism and the dynamics of interpersonal relationships. And while these are valuable, they’re not the real point of the story. Here is a woman who, in the minds of many Jews, would have been as far as you can get from the family of God. The story quickly reveals, however, that she is not merely welcomed by Jesus, she is actually pursued by Him. This is clearly a divine appointment. And in spite of her attempts to change the nature of the conversation, Jesus persists in confronting her with the truth of her situation and then inviting her into the truth of His person.

This story, as well as any, illustrates the new reality of God’s Kingdom as described by John in the opening verses of the Gospel…

He came to His own, and His own people [the Jews] did not receive Him. But to all who did receive Him [even this Samaritan woman], He gave them the right to be children of God, to those who believe in His name, who were born, not of blood, or of the will of the flesh, or of the will of man, but of God [as opposed to race, gender, or geography] (John 1:11-13).

Even the discussion about true worship (4:19-24) should not distract us from the real point. Yes, there is much here about genuine worship. But the discussion is a natural extension of the ongoing conversation. Jesus is peeling back the layers of objection and cultural conventions to reveal the truth that God welcomes people who come to Him at a spiritual level, not on the basis of gender, race, geography, or preferred place of worship. This was a radical concept for Second Temple Jews.

Jesus’ discussion with His disciples upon their return from the village (John 4:27-37) underscores the same reality. The Kingdom of God encompasses people and priorities that even Jesus’ disciples “don’t know about” (John 4:32).

Finally, the collective testimony of the Samaritan villagers drives home the primary point…

And they told the woman, “We no longer believe because of what you said, for we have heard for ourselves and know that this really is the Savior of the world” (John 4:42 emphasis added).

Jesus didn’t come merely to save “His own people” (John 1:11). This story makes the unmistakable point that Jesus is the “Savior of the world!”

Highlights:
• Everything about this story underscores the core truth that all people are important to Jesus and He will go out of His way to bring them into His love.
• Jesus’ conversation was driven by His love for this woman and the other Samaritans. No one is beyond the limits of His great love.

Point(s) of Interest:
• This story is one of the longest in all of the Gospels. This fact underscores the story’s importance and centrality in the Gospel of John.
• This story comes shortly after the story of Nicodemus’ visit to Jesus in John 3. Both stories point to the spiritual nature of God’s Kingdom (John 3:3).
• The fact that Jesus stayed with the Samaritans for two days underscores the core truth that all people are important to Jesus and He will go out of His way to bring them into His love.

Approximate Date:
This event occurs approximately six months after the beginning of Jesus’ ministry and immediately before the start of what is often called the “Galilean Ministry.” 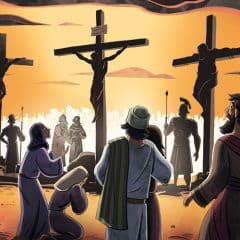