Paul and Silas Were Rescued from Jail 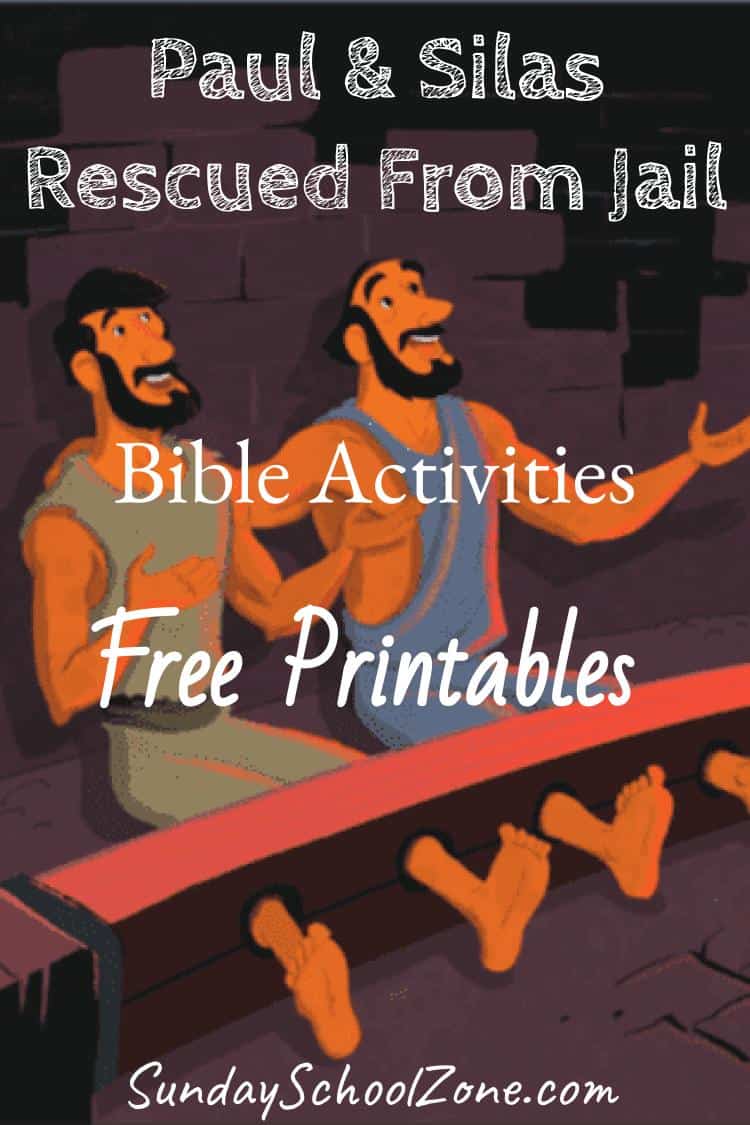 In Acts 16:16-40, Paul and Silas were thrown in a Philippian prison. Confined to the stocks, they sang and prayed. An earthquake occurred, freeing the prisoners, and the jailer, who was responsible for all of them, almost took his own life. However, Paul and Silas reassured the jailer they were not going to escape. That night, the jailer and the members of his household became believers in Jesus. These lesson activities highlight this event in the early church. 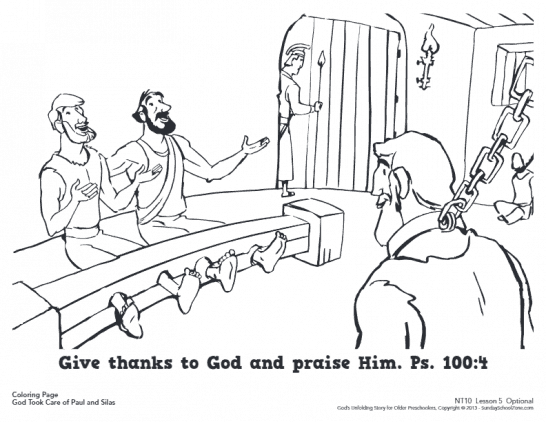 Paul and Silas Were Rescued from Jail Coloring Page

This simple Paul and Silas Were Rescued from Jail Coloring Page will remind kids that God is watching over His followers and will do whatever is needed to accomplish His purposes in them. This can be used in a Sunday School, classroom or homeschool setting. 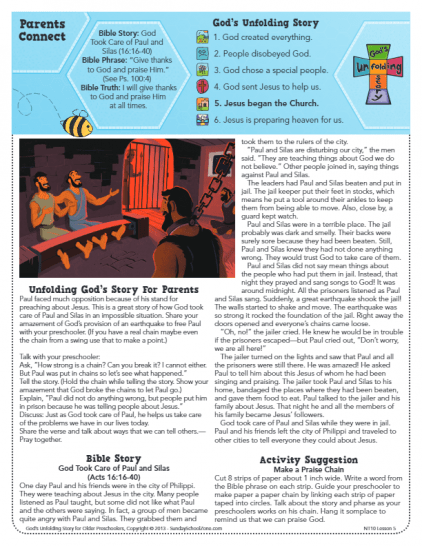 Every lesson from God’s Unfolding Story for Older Preschoolers includes a Parents Connect page to help parents or guardians reinforce the lesson at home during the week following the lesson. This is the God Took Care of Paul and Silas Parents Connect Page (NT10L5PC). Click on the Get Activity button below to view and/or download the lesson… 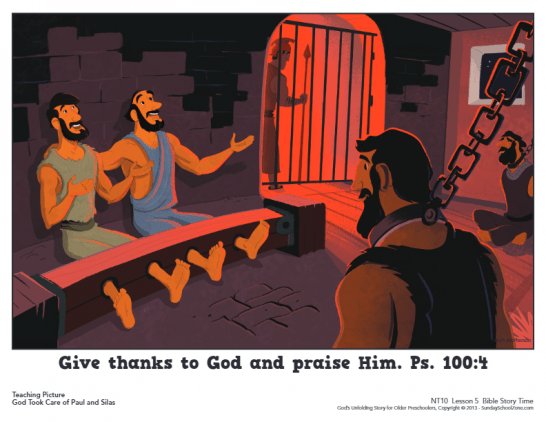 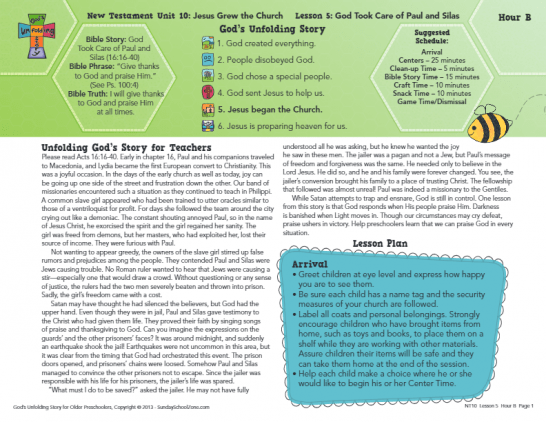 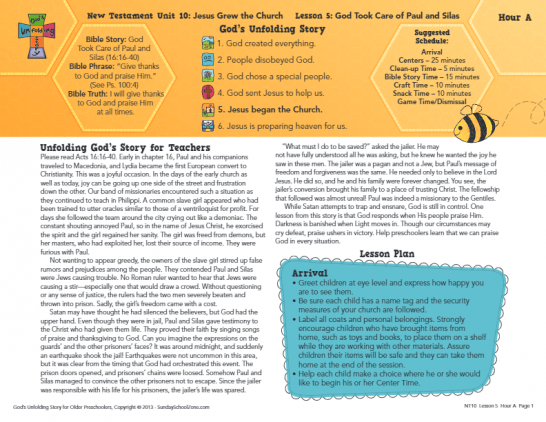 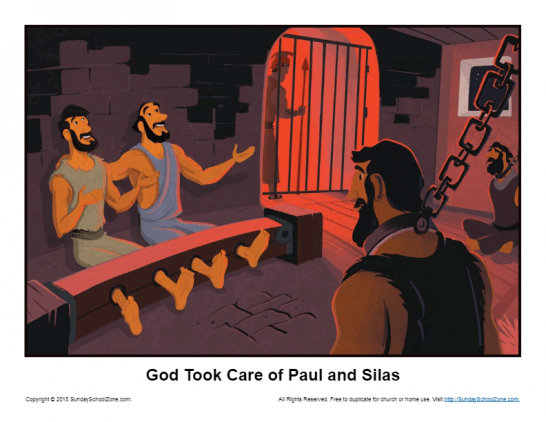 During Paul’s many adventures, God always showed His providence and protection. Paul and Silas’ deliverance from prison found in Acts 16 is one such event. This story illustration will help kids remember to praise God in all circumstances. 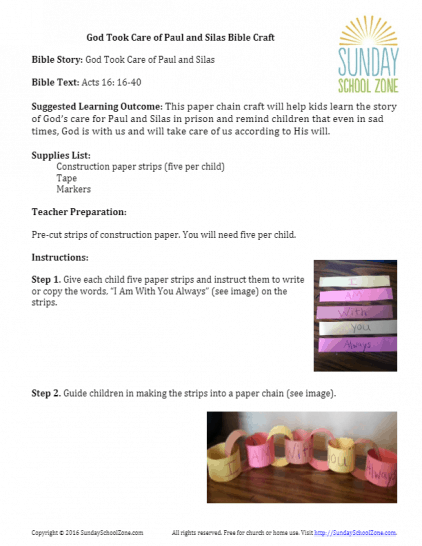 This paper chain craft will help kids learn the story of God’s care for Paul and Silas in prison, found in Acts 16:16-40, and remind children that even in sad times, God is with us and will take care of us according to His will. Kids will enjoy making and playing with the paper chain. 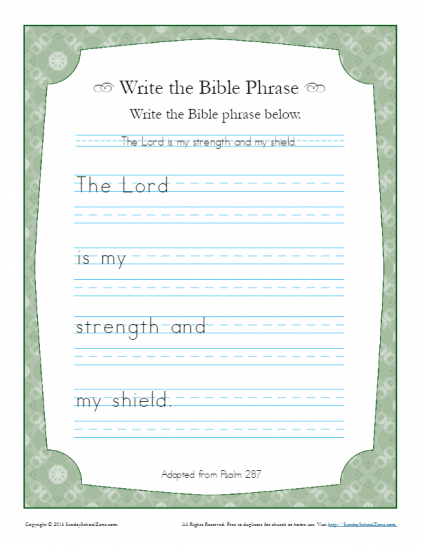 This Write the Bible Phrase worksheet calls for kids to write, “The Lord is my strength and my shield.” This is an adaptation of Psalms 28:7 and will help children remember that God is our protector. 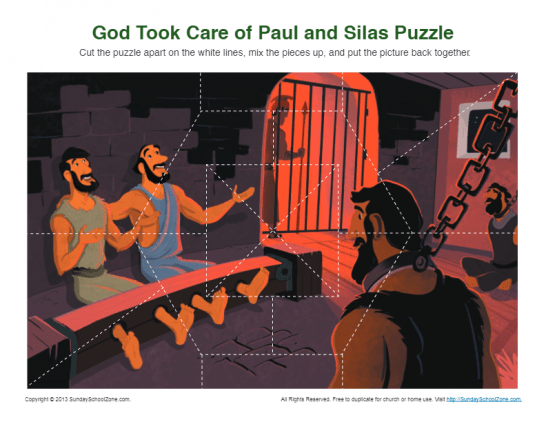 When put together, this 16-piece jigsaw puzzle depicts Paul and Silas in the Philippian jail where they sang and prayed—and where a jailer saw that they had something he didn’t have. Before the night was over the jailer and his entire household put their faith in Jesus for salvation. As your children work this puzzle, review the story with them. You can read it in Acts 16:16-40.