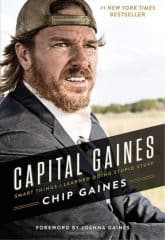 I just finished reading Capital Gaines by Chip Gaines. If you’re like my wife, you are well acquainted with Chip and Joanna Gaines. Or is it Joanna and Chip Gaines? The fact that I even find myself wondering about that should tell you something about the character of this couple who star in HGTV’s Fixer Upper, a reality show based on one of the businesses this couple owns and operates. They are “a pair” in every sense of that phrase. They’re different in many ways while being clearly together. You just can’t not like these two!

If you’re like me, you’ve seen some episodes of the show, and while you like them, you’re not following them on social media and buying everything marketed under the “Magnolia” brand. Still, my wife encouraged me to read his book (published in 2017) after she (of course) purchased it and read it.

So, I already liked this guy just because of his genuine, affable spirit and his obvious love of people, especially his wife and family. His book, however, showed me a different side of him. His stock went up in my estimation.

The subtitle of Capital Gaines is “Smart Things I Learned Doing Stupid Stuff.” And while the subtitle is intriguing, don’t expect the book to be filled with comedic stories of the “stupid stuff” this guy has done. It’s really not and that’s okay.  And by all means, don’t allow yourself to think for one moment that Chip Gaines is “stupid” himself. He is far from it.

TV shows never give you a full and accurate picture of someone. They can’t. Even reality TV shows are rehearsed, scripted, staged, and edited for maximum drama. In Chip’s case, the show simply can’t provide a glimpse of just how articulate and intelligent he really is. It takes a book like this to demonstrate that he can build a story as well as a house. A writer’s tool box is very different from a carpenter’s tool box. Chip apparently has both and knows how to use the tools in each.

But almost anyone can develop writing skills (if you work at it) or find someone to write and edit on your behalf. That’s why there are publishers. The real value in this book isn’t found in the quality of its solid writing, but in the content itself. Chip isn’t just articulate, he is wise. And I don’t mean he’s wise compared to the average guy. Chip’s book demonstrates a level of wisdom that would rival anyone. My sense is that this wisdom comes from his experiences, yes, but it also comes from his parents and grandparents, his wife, and an obvious and unashamed commitment to his Christian faith. And, he believes in learning from your mistakes, “stupid” or otherwise.

I won’t spoil the read by detailing the flow of the chapters in his book. Yes, you will learn more about Chip and Joanna. Yes, you’ll get a much better look at the man you’ve grown to love. And yes, you’ll discover that the man you see in the show is the man he really is and much, much more. So, read the book! You won’t be disappointed.

But, don’t imagine that entertainment is the goal of this book. Chip is out to change the world and his strategy is to challenge you to join him in your own unique way. As a user on Sunday School Zone, you are likely a Christian parent or teacher of children. Capital Gaines will help you be better at that task and see your entire life, including your parenting and teaching, in a new way. It’s a good read that’s well worth your time and money!