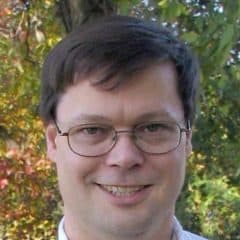 Chris Solaas has worked for 25 years in various children’s ministries like the Boy Scouts, Awana, and Sunday School. He spends his days as a programmer analyst for a chemical manufacturer. His evenings are spent with his loving wife and kids, four cats, and a snow-white bi-eyed monster dog who eats trees.

Chris is a poet, a novelist, a songwriter and an Eagle Scout. His songs can be found on his band website. His novels can be found at his author site, Lynvia.com and on Amazon or Kindle. His poems are for his wife alone, and might only be found in Christmas Cards and other mushy stuff.

Chris has published a set of Christian Indie Couch to 5K(C25K) running tracks which have seen a few hundred thousand downloads, and are available through his band website. He writes for several blogs, including: The Sunday School Zone, ADHD Family Fun – a series of entertaining posts about his ADHD family, Creative Adventuring – a more active blog of his journey towards publication, and just recently, a review site for Christian self-published and small-press published books, Christian Indie Book Reviews.

Read all of Chris’s articles on The Sunday School Zone Blog.