Christians and the New Year 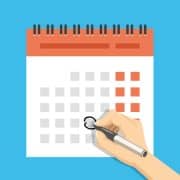 “The First Month of Your Year”

When Yahweh first gave Moses instructions for the Passover, He told Moses that “this month is to be the beginning of months for you; it is the first month of your year” (Ex. 12:2). This means God expected His people to associate their New Year (the “beginning of months”) with the Exodus and their deliverance from Egyptian slavery.

Throughout Israel’s history, the Exodus and subsequent Sinai Covenant has been the defining collective moment in their history. It was in the Exodus that Yahweh delivered them and it was at Sinai that He constituted them as His “kingdom of priests” (Ex. 19:6). The beginning of these paramount events was the showdown between Moses and Pharaoh, culminating in the death of the firstborn within Egypt because Pharaoh refused to let the people go (see Ex. 11). The people were to commemorate this decisive victory over Egypt by celebrating the Passover every year. The Passover, therefore, became the celebration that marked the Hebrew New Year in the Old Testament*.

Jesus and the Last Supper

At the last supper, Jesus associated His own sacrificial death with the Passover Festival (see John 13). By doing so, Jesus was declaring that HE was the final, ultimate sacrificial lamb who’s blood was to be shed for the deliverance of His people. Most Christians now observe Jesus’ sacrificial death by observing Communion or The Lord’s Supper in their churches with some regularity.

However often we may observe The Lord’s Supper in our churches, it is also appropriate to recognize that the New Year is a good time to celebrate the salvation and deliverance we know in Jesus. After all, when we come to know Jesus, He delivers us from spiritual bondage just as surely as the Hebrew people were delivered by God centuries ago. It’s true that the calendar most of us follow today is different from the Jewish calendar, but the New Year is still a good time for God’s people to collectively celebrate our “spiritual birthday” and the miracle-working power of our great God!

*Modern Jews observe the New Year several months after the first month on their calendar. For a fascinating and well-written discussion about the Jewish calendar, go here.