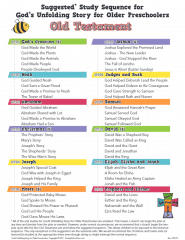 The backbone of any Bible curriculum resource is its study plan or what is often called its “scope and sequence.” Scope refers to WHAT is being studied while sequence is just that, the sequencing of the content or when each story is to be studied. The Suggested Study Plan for God’s Unfolding Story for Older Preschoolers (its scope and sequence) can be downloaded as a PDF.

What Is Its Scope?

What Is Its Sequence?

The suggested “sequence” of study for the curriculum is roughly a chronological study of the selected stories. There are a few places where the dating of certain stories is uncertain and we offer seasonal lessons (Christmas and Easter) to be studied at the appropriate time, but generally speaking, kids will study stories beginning with creation and going through eternity in heaven as revealed in Revelation.

Is the Study Plan Flexible?

All of the lessons in God’s Unfolding Story for Older Preschoolers are undated. That means you can study any lesson during any week. The Suggested Study Plan provides the ideal sequence if you wish to carry your kids through the biblical story in chronological order.

Is It Just for Sundays?

Most churches will choose to use God’s Unfolding Story for Older Preschoolers on Sundays, but some are using it on other days of the week as an alternative. Each lesson contains an Hour A lesson plan and an Hour B lesson plan. So in the course of the entire plan, the church is receiving more than 400 hours of lesson plans. Two lesson plans (Hour A and B) are provided for the sake of those churches that need to teach preschoolers for two hours, such as when parents want kids to attend a Bible class rather than adult worship. Some churches may choose to teach Hour A on Sunday morning and reinforce the study with Hour B on Wednesday evening.

What Ties It Together?

Each lesson plan encourages teachers to review the six narrative elements of God’s Unfolding Story. This means each story is always connected to the broader biblical story. Children will quickly learn there’s a bigger story taking place within which the weekly story fits. They also will begin to learn that the biblical story continues to unfold even today and they have a place in it!

As you can see, God’s Unfolding Story for Older Preschoolers is both strategic and flexible. If you have questions about the curriculum, simply contact us. You can also find additional articles about it on the site.