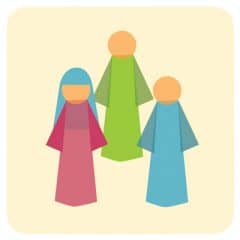 Now, to meet Adam’s specific need for an appropriate helper, God caused Adam to enter a deep sleep. While he was sleeping, the Lord removed one of his ribs and fashioned from it a woman, whom He placed before Adam. Now Adam was fully awake, for he responded joyfully, almost as if to say, “Yes! At last! She is perfect to be with me, because she came from me!” (See v. 23.)

The man and the woman were different, but both were human beings with human qualities. They complemented each other. This compatibility is a foundational element of marriage, an institution we see clearly described in Genesis 2:24-25. The woman was “the mother of all the living” (3:20), so Adam called her Eve, which means “life.”