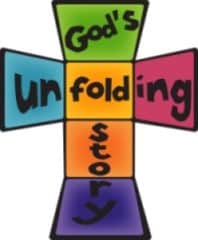 Some of the verses are longer, so this list may be best for older kids or approached in a longer term Scripture memory strategy. We have grouped them by story element.

In the beginning God created the heavens and the earth. – Genesis 1:1: This verse is foundational to biblical faith as it reveals that God is the Creator of all things. He is, therefore, worthy of our devotion, obedience, and love.

Then God said, “Let Us make man in Our image, according to Our likeness.” – Genesis 1:26a: This verse reveals that God also made man deliberately and with purpose. Humans are to be God’s image-bearers, representing Him and extending His rule into the world.

“In fact, God knows that when you eat it your eyes will be opened and you will be like God, knowing good and evil.” Then the woman saw that the tree was good for food and delightful to look at, and that it was desirable for obtaining wisdom. So she took some of its fruit and ate it; she also gave some to her husband, who was with her, and he ate it. Then the eyes of both of them were opened, and they knew they were naked; so they sewed fig leaves together and made loincloths for themselves. – Genesis 3:5-7 These verses record the decision by Adam and Eve to disobey God because they doubted God’s goodness and perceived that a tree could provide more than He had already provided.

I will put hostility between you and the woman, and between your seed and her seed. He will strike your head, and you will strike his heel. – Genesis 3:15: These words were spoke to the serpent just a few verses after Adam and Eve ate of the fruit. Many believe the “seed” of this verse is a reference to Jesus, the Messiah, who ultimately crushed Satan in His death on the cross.

The Lord said to Abram: Go out from your land, your relatives, and your father’s house to the land that I will show you. I will make you into a great nation, I will bless you, I will make your name great, and you will be a blessing. I will bless those who bless you, I will curse those who treat you with contempt, and all the peoples on earth will be blessed through you. – Genesis 12:1-3: God chose Abraham and called Him to be the father of a people who would be used by God to restore people and creation.

For you are a holy people belonging to the Lord your God. The Lord your God has chosen you to be His own possession out of all the peoples on the face of the earth. – Deuteronomy 7:6: After God delivered the Israelites from Egypt, Moses wrote the Pentateuch (the first five books of the Bible). Here Moses reaffirmed God’s choice of Israel as His special people.

God Sent Jesus to Help Us

See, the virgin will become pregnant and give birth to a son, and they will name Him Immanuel, which is translated “God is with us.” – Matthew 1:23: When Joseph learned that Mary was pregnant, an angel appeared to him and quoted from Isaiah 7:14. Jesus would be the long-awaited Messiah promised in the Old Testament.

The next day John saw Jesus coming toward him and said, “Here is the Lamb of God, who takes away the sin of the world! – John 1:29: When the time was right, Jesus went to John the Baptist to be baptized and publicly initiate His ministry. John made this announcement regarding Jesus. Just as the blood of the Passover lamb brought salvation to God’s people when God passed over Egypt and claimed the lives of the firstborn from households that didn’t claim the blood of the lamb, so Jesus would become the final and greatest “Lamb of God.”

“Go, therefore, and make disciples of all nations, baptizing them in the name of the Father and of the Son and of the Holy Spirit, teaching them to observe everything I have commanded you. And remember, I am with you always, to the end of the age.” – Matthew 28:19-20: Following His resurrection, Jesus gave His followers this commission. The church would now become the expanded Israel and assume the calling given earlier to Abraham and his descendants.

But you are a chosen race, a royal priesthood, a holy nation, a people for His possession, so that you may proclaim the praises of the One who called you out of darkness into His marvelous light. – 1 Peter 2:9: In this verse Peter echoes the Old Testament commission place on Israel (Ex. 19:4-6). The people of the New Testament church are now God’s “royal priesthood.”

Jesus Is Preparing Heaven for Us

He then carried me away in the Spirit to a great and high mountain and showed me the holy city, Jerusalem, coming down out of heaven from God, arrayed with God’s glory. Her radiance was like a very precious stone, like a jasper stone, bright as crystal. – Revelation 21:10-11: In the final chapter of the Bible, John the Apostle describes the new Jerusalem and gives us wonderful assurance that Jesus is indeed preparing a magnificent place for us!