Yahweh – The Name of God 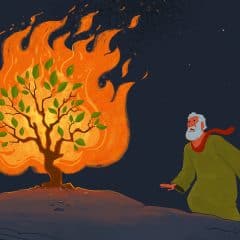 The naming of people, places and things is important to us because doing so allows us to know who or what we are dealing with; a name identifies someone or something, thereby allowing us to know where we stand in relation to that person or thing. But why is Yahweh – the name of God so important?

What’s In A Name?

In biblical times, names were more significant than they typically are today in Western culture. Not only did a name identify a person, but it contained information about one’s family and one’s character, as well as often foretold (anticipated) details about that person’s life or future actions. And, just as people are named, so God has a name that helps us understand who He is. In Exodus 3:14-15, God commanded Moses to tell His people He is to be remembered by His name. Listen to these verses as translated in the Holman Christian Standard Bible.

Clearly, God did not speak to Moses in English, but rather in ancient Hebrew. Not only were the Hebrew words different from English, the Hebrew letters were different, also. Converting a Hebrew word into an English equivalent is called transliterating. When transliterated into English, God’s name as given to Moses in this phrase would be Ehyeh Aser Ehyeh and is most often translated as I AM WHO I AM.

Ehyeh is the first person singular imperfect form of Hayah (“existed” or “was”) and literally means “I will be,” translated in the HCSB as “I am.” Aser is a rich Hebrew word that can mean “that, who, what, which or there.” So, collectively, the phrase can be translated: “I am who I am,” or “I will be who I will be.”

Hebrew does not use a vowel system as does English. There are only consonants with a pointing system to assist where English uses vowels. Consequently, Ehyeh (Hebrew) is often transliterated as YHWH and then further enhanced as Yahweh.

We use the pronunciation YAH-way (sometimes also Yahuwa, Yahuah or Yehuah, thus explaining how we arrive at Jehovah) for at least two reasons: 1) As mentioned earlier, Hebrew does not use a vowel system as does English, so we’re using our best guess as to what the original pronunciation might have been. 2) The ancient Hebrews treated the name as being so holy that they would not speak the name, much less write it. In fact, many modern Jews use the construction, G-d, to avoid a possible offense to God. However, by revering the name to the point of avoiding its use, the Jewish people forgot how to pronounce the very name by which God commanded they remember Him.

We will use the name Yahweh on this site and in the curriculum we produce in an effort to underscore the reality and significance of God’s name, as well as be obedient to His command. That’s why Yahweh – the name of God is important. You can read more about Yahweh as the name of God.