Esther and the King Jigsaw Puzzle 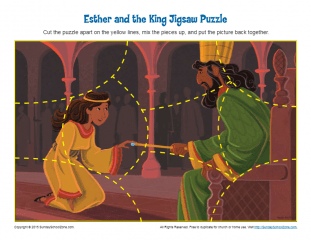 Bible Lesson: Many of God’s people, the Israelites, were living in a foreign country. Esther, a young Jewish woman, was chosen to be the Queen to King Xerxes. Meanwhile some evil men were plotting to have all of the Jews killed. Esther took a risk and approached the king to intercede on behalf of her people. She found favor with the king and God’s people were spared. This free jigsaw puzzle will help kids learn the story of Esther and the value of trusting the Lord to protect us.